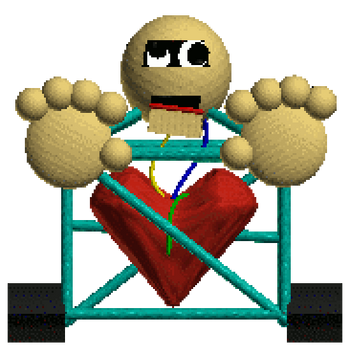 1st Prize is a robot that won first prize at the science fair in Here School, the school in which Baldi's Basics takes place in. Its main role is to push back the player across entire hallways while simultaneously "hugging them", holding them in place for a few seconds. This can either help or harm the player, as it can push them away to help them escape from Baldi, or push them right into Baldi. The robot can also push Baldi and rescue the player from Playtime's minigame.

Powers and Abilities: Superhuman Strength and Durability, Peak Human Speed, Regeneration (High-Low, after its wires have been cut, they will quickly repair themselves), Inorganic Physiology (Type 2)

Attack Potency: Likely Human level (Can hold and restrain the player, who is presumably a small child, by "hugging" them), Wall level via charging (Slammed the player into a wall at speeds sufficient enough to generate this energy)

Lifting Strength: At least Below Average (Can push back a young child at high speeds)

Durability: At least Wall level (Can withstand being slammed into walls at high speed by Gotta Sweep)

Stamina: Seemingly limitless as a robot

Intelligence: Likely very low as a robot, though it is at least capable of speech

Weaknesses: It slows down if its wires are cut, also turns very slowly