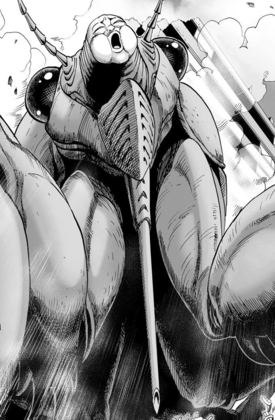 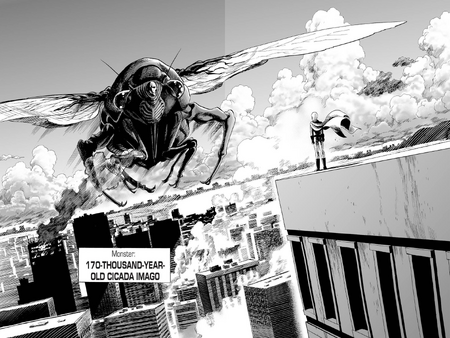 The Magicicada Nymph is a massive cicada that has the face of a child located at the center of its head, between its eyes.

During Saitama's training years, the Magicicada Nymph attacked Z-City and defeated two C-Class heroes Grad School Graduate, Red Muffler, and the B-Class hero Darkness Blade with ease while the rest of the population barricaded itself within Shelter Nr. 7. Sometime later two unnamed A-Class heroes tried to fight it but were also defeated causing the Hero Association to declare Magicicada Nymph as a Demon level threat. They then decide to send one of their newly built subjugation squads to finish it off. Saitama, while running around in search of a bathroom, runs into the Nymph who suddenly attacks him, however, Saitama swiftly defeats it. Years later, Saitama encounters the 170,000-Year Magicicada Adult on top of a building, and presumingly dispatches it with the same amount of ease as its Nymph counterpart.

Intelligence: At least Below Average