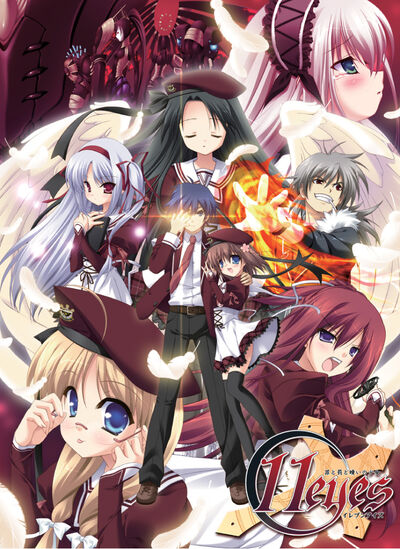 11eyes is a visual novel developed by studio Lass, that was later adapted into an anime by DogaKobo, and a manga. It follows Kakeru Satsuki, who lost his older sister five years ago. Kakeru tries to return to normal life, but lives an impassive and depressed life.

One day, the sky suddenly turns red and the moon becomes black. Everyone besides Kakeru and his childhood friend Yuka disappears and monsters start roaming the streets. All they can do is run away and hide. A while later, it all gets back to normal. But when they start to think it's all passed, the Red Night happens again. They find out that there are four more humans who are involved in this mysterious phenomenon. They gather together to try to survive, while being chased down by a group a six powerful monster-like warriors, the Black Knights.

Most characters are Small Building level in AP and Supersonic in speed, while characters like Shiori, Avaritia, Misao and Lieselotte are Small City level.

And the Gods of the series like Kukuri and Demiurge are Multiverse level+ and Immeasurable in speed. 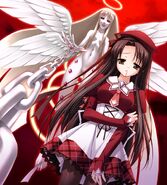 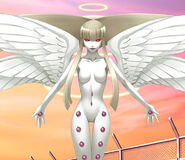 Demiurge
Add a photo to this gallery

Shiori
Add a photo to this gallery

Acedia
Add a photo to this gallery

Lieselotte
Add a photo to this gallery

Retrieved from "https://vsbattles.fandom.com/wiki/11_eyes?oldid=6995050"
Community content is available under CC-BY-SA unless otherwise noted.