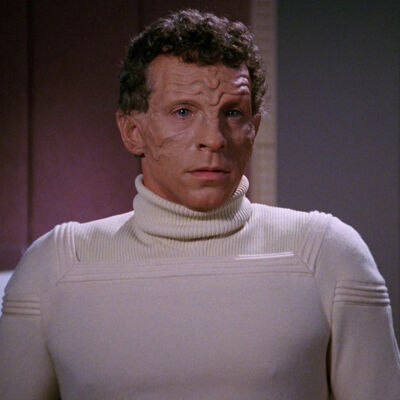 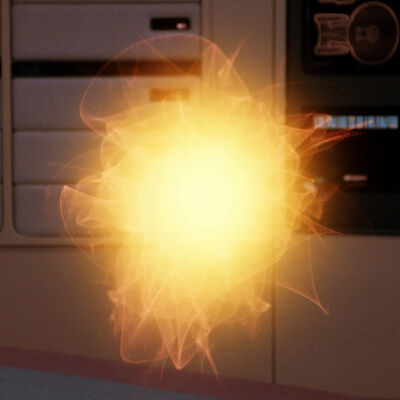 "John Doe" was the name given to a Zalkonian alien discovered among the wreckage of an escape pod by U.S.S. Enterprise NCC-1701-D in 2366.

"Doe" was one individual of many who served as a hallmark for Zalkonians as they began to evolve into a new form of existence. Persecuted by Zalkonian authorities, who viewed the evolution of these individuals in their society as a threat, Doe fled his homeworld and crash-landed on a different, more remote planet. When discovered by the Enterprise, Doe had several life-threatening injuries and Dr. Beverly Crusher believed that he would not survive, but "Doe" demonstrated tremendous recuperative powers and became well again. While recuperating, Doe began to manifest strange powers, including emanations of energy and the ability to heal wounds by touch, and even to restore life.

However, the injuries Doe had incurred included amnesia, preventing him from explaining his abilities or even why he had been on the run. When Crusher reported that his cell mutation had increased, he feared that he would become a threat to the crew and decided to leave, attempting to steal a shuttlecraft. When Lt. Worf, the Enterprise's Chief of Security, tried to stop him, Doe generated a large flare that killed the CoS. Worf had broken his neck and was dead, but Doe revived him by just touching him. The Zalkonians eventually found "Doe" aboard the Enterprise and the Zalkonian Commander, Sunad demanded his return as a criminal to face the death penalty. When Captain Jean-Luc Picard refused, Sunad, who enforced a genocidal program that almost wiped out all Zalkonians exhibiting this evolution, attempted to take Doe by force, using an energy beam that began suffocating the crew of the Enterprise. However, Doe was able to heal the crew and dissipate the beam.

He brought Sunad onto the Enterprise and explained to Picard that his species was on the verge of an evolutionary change. Doe tried to convince Sunad that this evolution was not evil nor were those like him a threat. Sunad refused his invitation and left, just as Doe completed his evolution into an energy being and left the Enterprise to begin his new existence, and to spread the word of the coming rebirth to his people.

Attack Potency: Universe level+ (Upon his evolution beyond that of a physical body, John Doe ascended to a higher dimension, describing a "higher plane of existence" where he and his people, once accepting the evolution, could live as energy beings that could control reality with their minds in a higher realm)

Speed: Infinite (Capable of instantaneous movement. Moved from the bridge of the Enterprise to his home planet instantaneously)

Durability: Universe level+ (Evolved to a higher plane of existence)

Intelligence: Very high. His species demonstrated a great understanding about the nature of existence and its concepts.