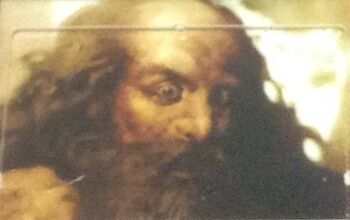 "Jerky" Johnson is a mysterious man, who by chance encountered the obsessed Captain Ahab. "Jerky" came aboard the man's ship, Pequod, and upon the captain's death, gained the boat. This member of the American faction can detect sea monsters, as well as control them.

Tier: 10-C physically, 9-C with weapons, 8-A possibly 7-B with Pequod, other ships/sea creatures, and unique treasures, higher with Runes of Odin

Clairvoyance (Can sense the location of sea creatures), Animal Manipulation (Somewhat to the point of Mind Manipulation. Can control sea creatures, which include gods who existed before humanity or even history itself, and have powerful minds beyond that of most humans), Statistics Amplification (Can increase the speed of sea creatures), Weapon Mastery (Is skilled with swords and various firearms), Vehicular Mastery (Skilled with almost any sea vessel, including subs and sea creatures), Immortality (Types 4 and 7 with The Devil's Maw; If "Jerky" dies, he will return as a ghost at The Devil's Maw fort, and can turn ships ghostly), Non-Physical Interaction (Can interact with Ghost Ships, as well as can harm ghosts and elemental beings), Curse Manipulation (via Cursed Zone. Curses an area, causing ships within the location to become unsuccessful at any desired action, aside from movement), limited Teleportation (via Hidden Cove. Can teleport to the nearest island), Blessed (via Favor of the Gods. Said gods instantly negate various negative effects), Minor Existence Erasure (via False Treasure. Can instantly remove all of an opponents gold from the game), Weather Manipulation (via Rolling Fog. Can create a moving fog bank), Summoning (via Mermaids. Can summon Mermaids to paralyze opponents), Air Manipulation (via Foul Winds. Creates a zone full of agressive winds, strong enough to move and damage ships)

All previous abilities, limited All-Terrain Mobility and Enhanced Senses (Ignores terrain when moving, which includes icebergs, whirlpools, fogbanks, etc. via Sextant), Fire Manipulation (via Mirror of Archimedes), Can Ride Sea Creatures (via Chariot of the Gods), Fear Manipulation (via The Cursed. This also grants Power Nullification and Statistics Reduction, though it also affects allied ships), Clairvoyance (via Shipping Charts, Pirate Globe, Spyglass, Marksman's Map, and Maps of Alexandria. Can see the treasure/equipment held on ships and islands respectively), Range Reduction (via Homemade Flag. Reduces opponent's range), limited Morality Manipulation (via Letter of Marque. Ships can dock at opponent's forts to repair, and the forts will not attack unless attacked first), Regeneration (Type Low-Mid for ships via Trees), Statistics Amplification (Grease Barrels, Frond of Fisaga, Jack's Compass, Homing Beacon, Runes of Speed, Screw engine and Poseidon's Breath increases speed of ships, while Metal Hull increases durability. Power Canons increase range), limited Immortality (Type 4)/Resurrection (via Neptune's Figurehead. When a ship "Jerky" is on is destroyed, the crew and the ship resurrect at their home island, though ship must be repaired), Healing/Disease Resistance (via Fruit. Negates the effects of Scurvy), limited Invulnerability (via Cross of Coronado, Runes of Defense, and Relics. Completely negates one attack from an opponent or negate an attack that would harm the ship or crew respectively. Relics, if used, is then given to the opponent), Explosion Manipulation (via Explosives and Mines), Self-Destruction (via Explosives. When a ship is rammed and would be sunk, it explodes to take out an opponent), Water Manipulation (via Neptune's Trident. Sends a massive wave that can destroy both forts and ships), Minor Existence Erasure (via Karmic Idol. Removes all unique treasures from the game), limited Damage Reduction (via Martyr's Amulet. Reduces damage from Cursed opponents), Weather Manipulation (via Witch's Brew. Creates a fog cloud), Power Nullification (via Holy Water and Periscope. Negates all opponent's abilities), limited Power Mimicry (Can mimic abilities of Cursed opponents), Animal Manipulation (via Cursed Conch. Can control any sea creature), Corruption (Type 2)/Transformation (via The Red Skull and Gem of Hades. Ship and crew become Cursed), Increases Marksmanship (via Targeting Scope), Destroys Icebergs (via Runes of Destruction), Magic and limited Telekinesis (via Runes of Magic. Can move icebergs), Ice Manipulation/Creation and Death Manipulation (via Runes of Odin. Creates an iceberg, which one-shots ships and sea creatures and instantly eliminates the crew of said ships), Minor Law Manipulation (via Runes of Wealth. Can manipulate the value of acquired treasure), Probability Manipulation (via Potions and Brews, Runes of Loki, and Runes of Thor. Can increase the probability of successful boarding, attacks, exploring, surviving, plundering, etc, or do the reverse for an opponent), Can Attack Underwater Foes (via Deadman's Chest), limited Existence Erasure Nulification (via Nemo's Plans. Can continue to use Unique Treasures that would be have destroyed in one way or another), Ignores Whirlpools (via Protection from Davy Jones), Sea Creature Deterrent (via Cattle and Triton's Defense), Creation (via Lost. Can create up to six types of terrain, which include icebergs, fog banks, coral reefs, and whirlpools), Immortality (Type 8 via Jack's Piece of Eight and Heart of Stone. When crew would be eliminated, the treasure is deactivated instead [Jack's Piece of Eight]. Linked to a crew member, giving them Resurrection, Fear Manipulation, Power Nullification, and Statistics Reduction as long as it isn't destroyed [Heart of Stone]), Paralysis Inducement (via Voodoo Doll. Can paralyze/stun non-cursed opponents), limited Teleportation (via Necklace of the Sky. Can teleport to any island), Mind Manipulation (via Alter of the Loa. Can kill two crew, gaining the ability to control an opponent)

Attack Potency: Below Average Human level physically (Is physically impaired, and is somewhat on the older side), Street level with weapons (Can fight Cursed crews. Most firearms and swords are this level), Multi-City Block level+ (Ships have a KE of 2,370,381,192,777 joules, and sea creatures and unique treasures can harm/destroy these ships) possibly City level (Can harm Brachyura, who destroyed multiple cities) with Pequod, other ships/sea creatures, and unique treasures, higher with Runes of Odin (Icebergs created with this ability can one-shot ships and sea creatures), abilities negate conventional durability

Speed: Normal Human movement (Comparable to other crew members), Hypersonic reactions (Can skillfully piolet ships at these speeds, as well as react to opponents' ships/sea creatures at similar speeds), at least Subsonic attack (Most guns are about this fast), Hypersonic movement with Pequod and other ships/sea creatures (Comparable to ships that can move Mach 6), higher with various unique treasures

Stamina: High (Can keep up with undead crew)

Intelligence: Above Average (Is a skilled crew member, and can piolet any type of sea craft including sea monsters with ease)

Weaknesses: He is almost blind, his left arm has an incontrollable twitch, and he walks with a limp.