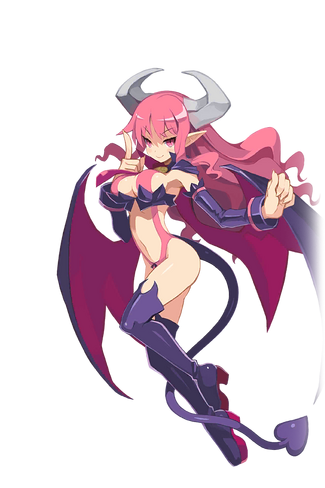 “Succubi consist solely of women. They make their living by seducing men. Contrary to their sexy looks, they are very adept at fighting, and it is unknown whether resisting them would do any good. All the other female classes hate Succubi, except Nekomatas for some reason.”

Attack Potency: Solar System level, possibly higher (Most demons if not all should be able to replicate Laharl's feat of destroying all the stars in the sky. Should be superior to a Prinny) | Galaxy level (on par with the Flora Beast who can do this) | Universe level (Equal to demons that can make a big bang by just punching) | Multiverse level+ (can damage characters like Killia)

Range: Standard melee to interplanetary with melee attacks, projectiles, and spells | Galactic with spells and projectiles | universal with Big Bang, and magic | Multiversal+ with spells

Retrieved from "https://vsbattles.fandom.com/wiki/Succubus_(Disgaea)?oldid=5135381"
Community content is available under CC-BY-SA unless otherwise noted.