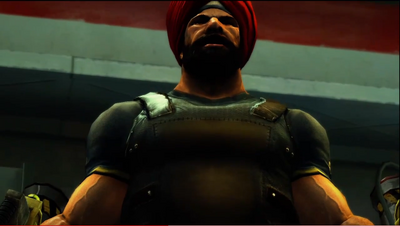 Harjit Singh, also referred to as the Commander, is the secondary antagonist and psychopath in Dead Rising 2: Case West and Dead Rising: Road to Fortune. As the head of security at the Phenotrans Facility he acts as Marian Mallon's personal bodyguard and serves as the final boss.

Powers and Abilities: Superhuman Physical Characteristics, Shockwave creation via Impact Hammers, Explosion Manipulation via rockets, Disease Manipulation via Queens (which can infect people with the zombie virus), Summoning (Can radio for reinforcements) Resistance to Sound Manipulation (The Air Horn has nearly no effect on him, which can kill looters and blow zombies’ heads off with pure sound)

Attack Potency: Wall level (Snapped a scientist’s neck, crushed a flash drive by casually stepping on it). At least Wall level via Impact Hammers (Oneshotted Isabela Keyes, who was also a psychopath and grappled with Frank West in the first game, can easily send heavy metal shelves flying with a single hit)

Speed: Superhuman (Can charge faster than Chuck Greene can run) with Subsonic reactions (Reacted to DR2 Chuck and Frank attacking him at the same time)

Lifting Strength: Peak Human (Lifted a person off the ground by his shirt and threw him to the floor, even trained soldiers and military can only hold one Impact Hammer at a time, while Harjit has one on each arm)

Durability: Wall level (Should be one of, if not the, most durable psychopaths in Dead Rising history besides Calder due to having 3 health bars. Can casually shrug off machine gun rounds and being hit with other Impact Hammers, which can instantly kill trained soldiers in heavy armor on their own, or even their corresponding Combo Weapon, Impact Blasters)

Stamina: High, survived an extended fight with both two Dead Rising protagonists at once, who should have highly impressive stamina feats in themselves. Has worked as a bodyguard and head of security at Phenotrans for many years.

Intelligence: At least Average, seems to have knowledge in fighting as he has figured out he can use his Impact Blasters’ shockwave generation to propel himself into the air, and is good at making surprise attacks. Started at least one city-wide zombie outbreak by releasing Queens in a crowded area.

Weaknesses: Relies a bit too much on his brute strength rather than skill.

Retrieved from "https://vsbattles.fandom.com/wiki/Harjit_Singh?oldid=4760188"
Community content is available under CC-BY-SA unless otherwise noted.