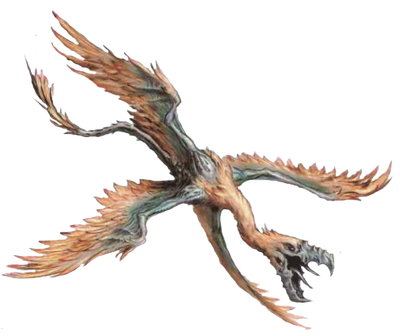 Arrowhawks were four-winged birds of prey from the Elemental Plane of Air, and were well-known for their ability to fly and levitate indefinitely from the second they were born. Their striking blue plumage was in fact scales developed for protection.

Their physiology has adjusted itself so the Arrowhawk can twist its body easily to adjust direction without losing any speed.

Classification: Outsider of the Elemental Plane of Air

Lifting Strength: Peak Human (An infant Arrowhawk can drag over 440 kg should it need to) | Class 1 (Adult forms can drag an increased weight of nearly 800 kg) | Class 5 (Can drag over 4.7 metric tons due to its massive size)

Stamina: Infinite, even whilst sleeping (optional) it continues to fly forever | Infinite | Infinite

Intelligence: Average, the species maintains extraordinary intelligence compared to other aviary creatures but lacks any significant advantage compared to humans

Retrieved from "https://vsbattles.fandom.com/wiki/Arrowhawk?oldid=4719190"
Community content is available under CC-BY-SA unless otherwise noted.